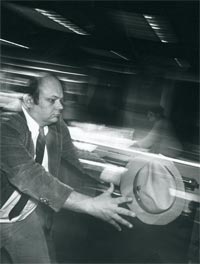 In 1977 Greg was called out-of-the-blue to audition for the new position of arts and entertainment editor at KING5 television in Seattle. KING5 was the first local station to create such a beat. With no previous experience in television, Greg was chosen over many many other applicants: the camera loved him, and so, very soon did the audience, which willingly suspended its disbelief that a balding, overweight, somewhat scruffy-looking fellow could appear on camera in a major American television market. Different days, back then, at least at KING5. 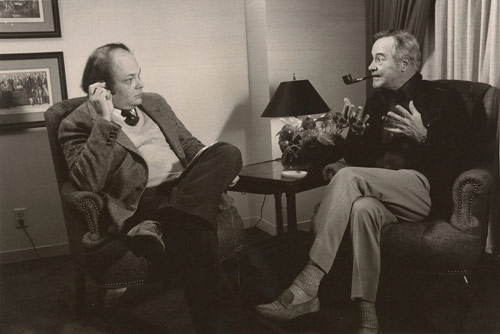 Jack Lemmon
His first assignment was to review movies three nights per week: click here for a sample early script. He quickly expanded his assignment to five nights a week of general Seattle arts coverage--continuing to review films, adding theatre, including visual arts and music more rarely. In explaining this weighting of coverage, he said to Jim Frazee of The News Tribune, "The film criticism's an extremely specialized consumer reporting. You have no time for analysis that's more than two sentences long. The most pertinent thing you can do is show clips. And some clips are awful. Woody Allen is extremely reluctant to put clips out. The first Allen clip I had was Manhattan. Thirty seconds in which 22 of those seconds were a discussion of masturbation. Couldn't be aired on any station. Philosophically though, I enjoy doing local professional theater more than film because I think that's a place where we can really make a difference." [January 3, 1988] He pioneered the live filming of rehearsals (and occasionally performances) to accompany his reviews of local theatre, in which he took special care with the feelings of actors. "Actors are a little paranoid--I would be, too--it took me a long time to convince them I would never set them up. If a film segment comes out lousy, I don't use it. I've canceled quite a few because it wouldn't be fair. If the production is lousy, I tell them before it runs." [in an interview with Alf Collins, The Seattle Times, March 21, 1980]

During this time Greg also began to write and direct feature programming. His "The Year (So Far) in Review," broadcast in July 1979, earned universally positive reviews--including one in Variety, rare for a local program, praising its "wry, offbeat view of news 'happenings' getting hilarious treatment from a talented group of actors from local theatres." He also began to "enterprise" special assignments. He convinced KING's morning show to underwrite two weeks in England, where he covered the fairytale-at-the-time Royal Wedding of Charles and Diana and gathered material for a half-hour special, "London Revisited." In a preview article, television columnist Susan Paynter, of The Seattle Post-Intelligencer, said that although he was unlikely to be invited to the wedding itself, given "a wardrobe resembling a rummage sale," his "pixieish view of the arts" would suit a collection of offbeat stories. 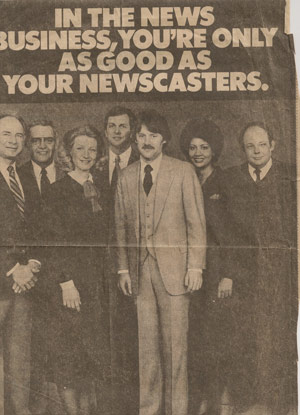 KING Staff
Despite the welcome given these programs, Greg was already aware of challenges in pursuing programming outside the news division. Shortly after "TY(SF)iR" aired, he discussed his situation with Roger Downey, writing for Seattle Weekly. Greg said, "Traditionally, all across the country, there is a hostility between news and production departments. At most stations, after all, news is about the only 'producing' that goes on, and the Production Manager is reduced to shopping for old movie packages. KING-TV on the contrary does a lot of production apart from news; but still, I'm over here in news, while my show was basically an entertainment feature; so it doesn't really fit the pattern." 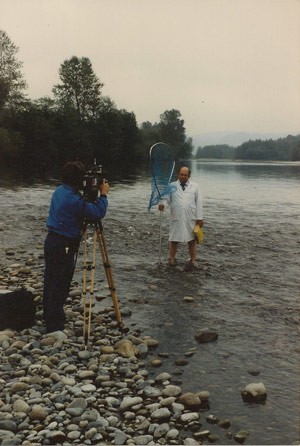 After seven-some years as arts and entertainment editor, Greg moved to "Top Story," the 6:30 newscast, as a signature reporter presenting "The Palmer Method," a catch-all feature for humorous and serious editorials, personality pieces, and even one-act plays (the title derives from an old technique for teaching cursive handwriting). He called the purpose of his "Top Story" pieces "the equivalent of an editorial cartoon." "The Palmer Method" continued after the "Top Story" format was cancelled. Click here for a sample piece and here for the NATAS Northwest tribute (containing snippets from many KING5 pieces) shown when Greg received the Silver Circle award.

Although he continued to develop longer feature pieces for the news division (for example, "D-Day: The Last Wave" and "Small Town Saturday Night"), Greg also was writing plays for young audiences during this period, two of which were filmed (one in performance, one re-staged) and broadcast on KING5. His most ambitious project of this nature involved adapting a Russian folktale, "Fenist the Bright Falcon" and directing it on location in the Caucasus mountains of formerly-Soviet Georgia, with a half-Georgian, half-American cast. "The Falcon" was broadcast on KING5 television in 1990, shortly after a "hard news guy" brought in from Sacramento declined to renew Greg's newsroom contract.

When Greg left KING5, colleague (and American Federation of Television and Radio Artists shop steward) Jack Hamann wrote this account of his departure.

Greg's attitude toward, and appreciation for, his thirteen-year run at KING5 are well expressed in an exchange he had in 1985 with a San Francisco news director (who shall be nameless). Mr. San Francisco accurately, and generously, said, "You have one of the most fortunate positions in commercial television. As an established signature reporter with a good long rope from your employer you are to be envied. Your work is wonderful. It couples your vision, sensitivity and humor with a very elegant sense of producing television. I suppose my best advice would be to behave reasonably well in the General Manager's presence and push for a bit more vacation time." Should Greg choose to move to the "high-stakes Northern California" market, he said, "you would be forced into a number of capitulations. Brevity and frequency would probably be the major issues. I don't think anyone would be fool enough to try and remedy your cosmetic deficiencies. But, then, you never know about management." Greg replied, "Thanks for your kind words regarding my work. Because KING is the only television station for which I have worked, the uniqueness of my position here, and my relative freedom to do what I want, have only become apparent to me in the last few years, as we've hired a number of staff from other markets. Quite a few of these people, on seeing some of my stuff, have assumed I have hidden in my desk photographs of Dorothy Bullitt robbing a bank in Kansas in 1933. What I have is Dorothy Bullitt, and her minions, and their splendid sense of local television as something other than a profit center." 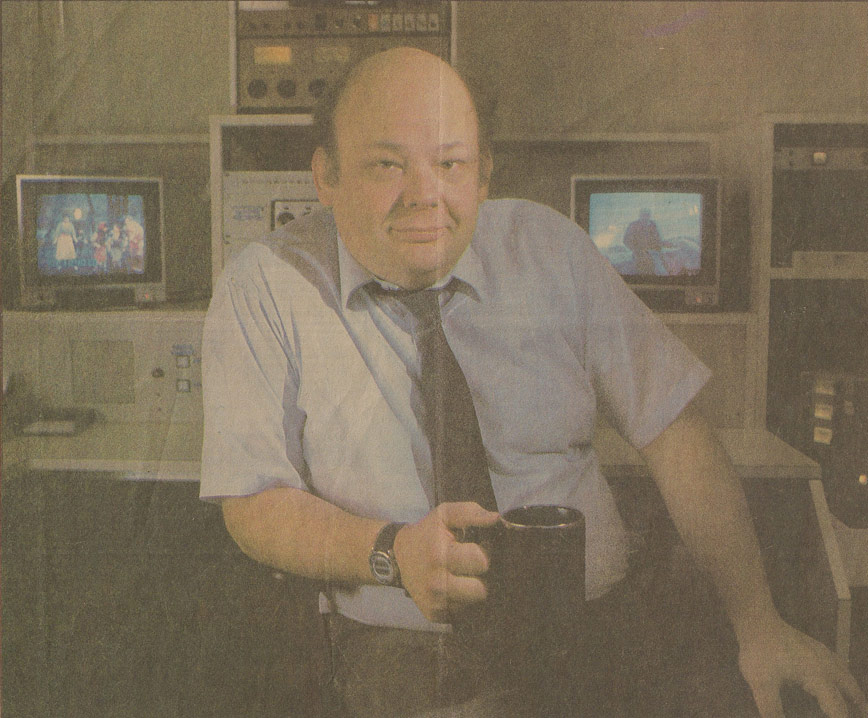