Purchase or borrow a Kindle Copy from Amazon

Purchase a Print Copy from Amazon

"The aging Sixties generation now confronts death in this non-fiction romp that rivals Evelyn Waugh's classic "The Loved One" as a laugh-a-minute examination of death rituals and customs … quite interesting and entertaining."

-- Library Journal
"It's hard to believe a book on death could be this much fun to read. … The guy is a born storyteller, with every good storyteller's vigilant sixth sense of the enjoyment of his listeners. Palmer possesses an astonishing cinematic memory--the look on a face, the length of a pause, the inflection of a voice--and can spin that memory into something nearly mythic. It makes perfect sense that for Palmer, memory is the form the afterlife takes."

-- Kathryn Robinson, Eastside Week (Bellevue, WA)
"Neither morose nor coyly dismissive in his narrative, the author largely avoids the TV-news "cutes" in his descriptions . . . (he) understands that Western civilization is as attracted to death as much as it is scared to death of it, especially in its popular culture. … The subjects are gruesome, but Mr. Palmer's touch is light enough to let us know he feels the same nervousness that we do about them. Laughing about it, Mr. Palmer seems to be saying, is about the only defensive mechanism we have - although that doesn't work either."

Death: The Trip of a Lifetime
Second Edition [Bennett & Hastings, 2013]

"It's a lot easier for me to say what this book is not than what it is. For instance, although some strange rituals are described, this is not Indigenous Peoples Do the Darndest Things! Although religious persons state their beliefs about the life everlasting, this is not A Day in the Life of Heaven and Hell. Although some of the methods human beings use to prepare for death are discussed, this is not So! You're Going to Die! Although much factual information slips in here and there, this is not A Cross-Cultural Analysis of Contemporary Death Attitudes, Belief Systems, Funeral Rituals, and Totemic Manifestations in Pre- and Postindustrial, Urban, and Agrarian Societies. And, finally, although this book is certainly associated with the PBS television series of the same name, this is not A Companion to the TV Shows with the Same Stuff Just All Written Out.

What this book is, I guess, is an attempt to take a closer look at death at a time in my life when death seems to be taking a closer look at me. … Death is one of only a very few things all living creatures have in common. And of eating, sleeping, breathing, and eliminating, death is by far the most fearsome and the most permanent. … This book is about some of the answers to some of the questions we have about death. Unfortunately, the questions we all have are unanswerable. Nobody told me from their personal experience what it's like to die and what happens after that. We'll all just have to wait and see."--Greg Palmer 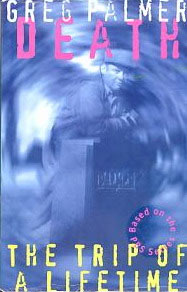 The first edition of Death: The Trip of a Lifetime was published by Harper Collins in 1993.