Greg Palmer wrote for more than forty years -- books, plays, articles, speeches, advertising, and news, reviews, features and documentaries for commercial and public television and radio. He was, undoubtedly, the only person who won the Peabody Award for radio humor and also was both the California Funeral Directors' Media Man of the Year and an Official Hero of the People's Republic of Georgia.

Greg's put-bread-on-the-table career was anchored by long-form and short-form work for broadcast media. His books (Cheese Deluxe; Adventures in the Mainstream; The GI's Rabbi; Death: The Trip of a Lifetime) and plays (The Falcon; The Big Bad Wolf, among others) showcase the broader range of his eclectic interests.

Please check back periodically for additions to this site, intended to serve the readers and audience members who admired Greg's work while it was being produced and those who are just now discovering his voice. Or add your address for an occasional e-mail notice when new material is added to the site. 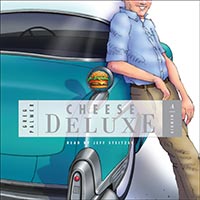 A "quirky gem of a book," read by award-winning voiceover artist Jeff Steitzer. Available on 8 discs, and via Audible, ACX, and iTunes.